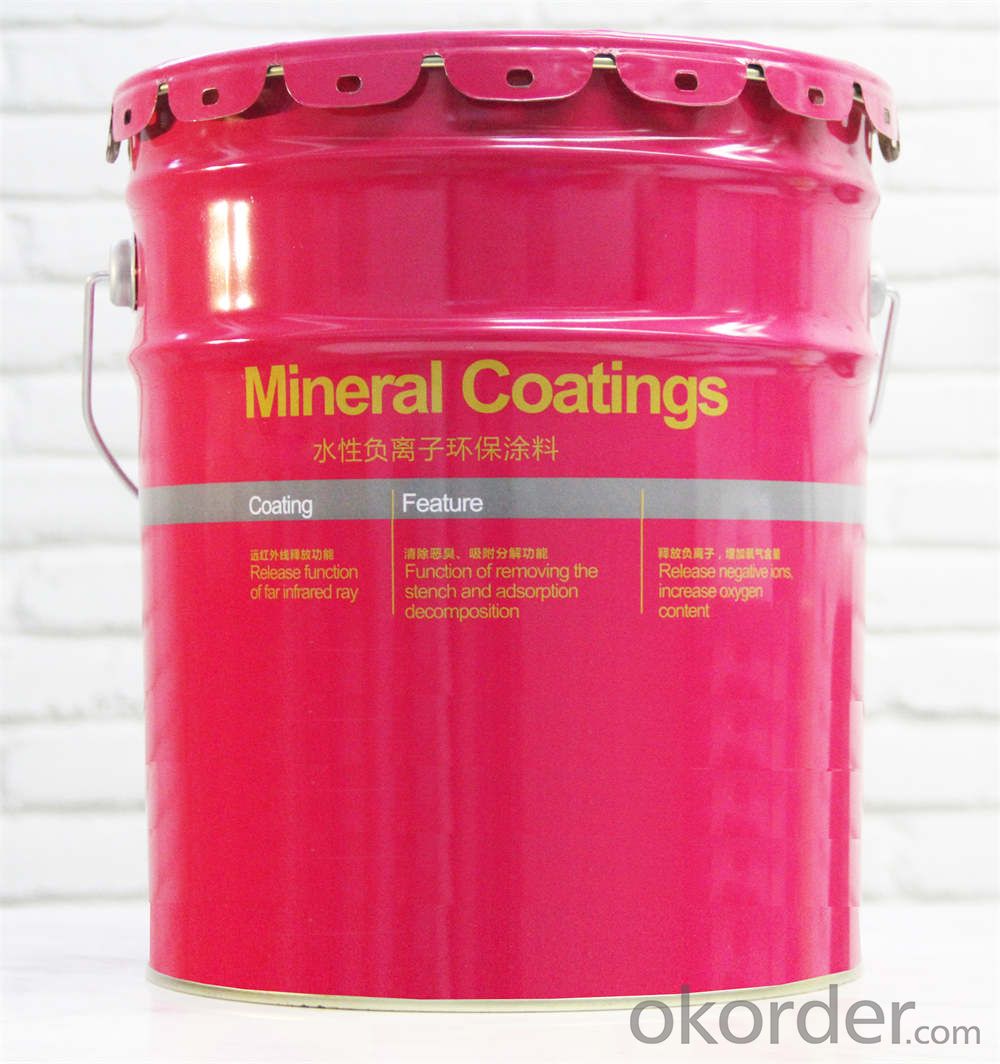 Creative made of water and sericite with superior color; without worrying about harmful substances. Inorganic mineral paint carefully for you to create a healthy and safe interior space.

Silicite and water in the indoor air reinforce with oxide ions, two cations that pull each other to form oxygen. Thus increasing the oxygen content in the air, for you and your family to bring fresh air like a forest.

As the main raw material, Sericite is a mineral formed by the Mesozoic period period of about 150 million years ago, due to the surface temperature rising under the magma and the solidified loess through thermal action. The main components of sericite include SiO2, Al2O3, K2O, CaO, Fe2O3, MgO, Na2O, etc. It has the effects of pore-removing waste and excess sebum, promoting blood circulation salt discharge and strengthening blood pressure, so it is often used in medicine and cosmetics raw materials, and sericite itself contains three effects. The effect of anions, far infrared is especially prominent than general ore.

* Far-infrared is a type of electromagnetic wave. It is easy to absorb organic matter, once absorbed, into heat.

Water-based anion environmental protection coating releases a large number of negative ions according to the characteristics of sericite.

The released negative ions combine with the water (positive ions) in the indoor moisture and become oxygen molecules, which form oxygen.

According to the characteristics of weak mica releasing fresh oxygen, thus creating a beneficial indoor environment for the human body.

The composition of sericite and its properties change after the water reaction occur, thus completing the exchange of moisture and active ions in the air and releasing negative ions (O2-), which combine with the cations present in the room to produce oxygen. 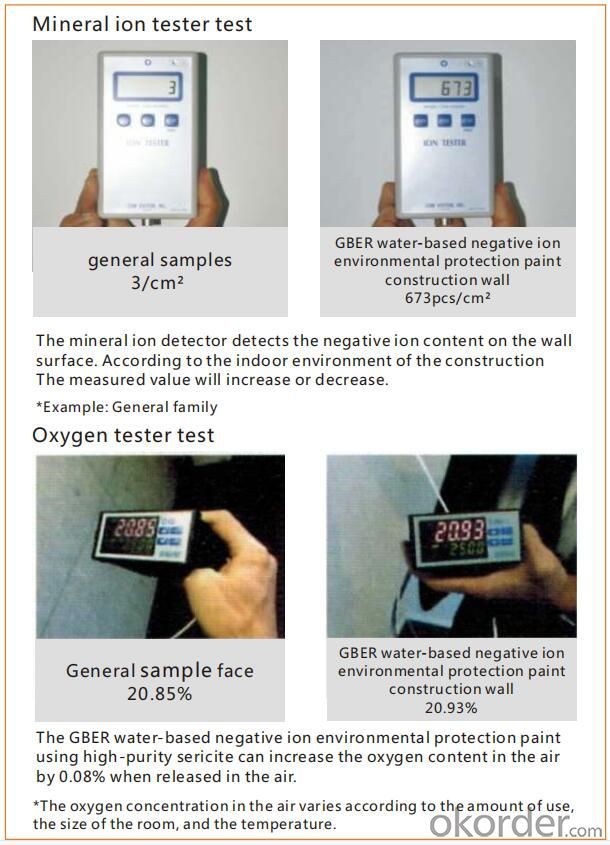 1: No hyphae were found on the test level

2: On the test level, the area of mycelium is found to be less

of the total area

of the total area

5: On the test level, the area of mycelium is found to be more

Release the natural anions 400-800 / cc to keep the air fresh and purify the air.

Fire retardant, do not burn when fire, do not release any harmful gas.

Humidity adjustment function, without the use of a humidifier.

Isolation of the electromagnetic wave function.

With excellent odor removal, adsorption and decomposition function, suitable for the toilet and pet room. The negative ions released by the main raw material sericite surround the malodorous micromolecules, combine with the evaporated warm water vapor (positive ions), and are absorbed by the sericite. And the components of sericite can decompose the stench, and no longer re-emitted, thus forming the function of removing the odor adsorption decomposition. 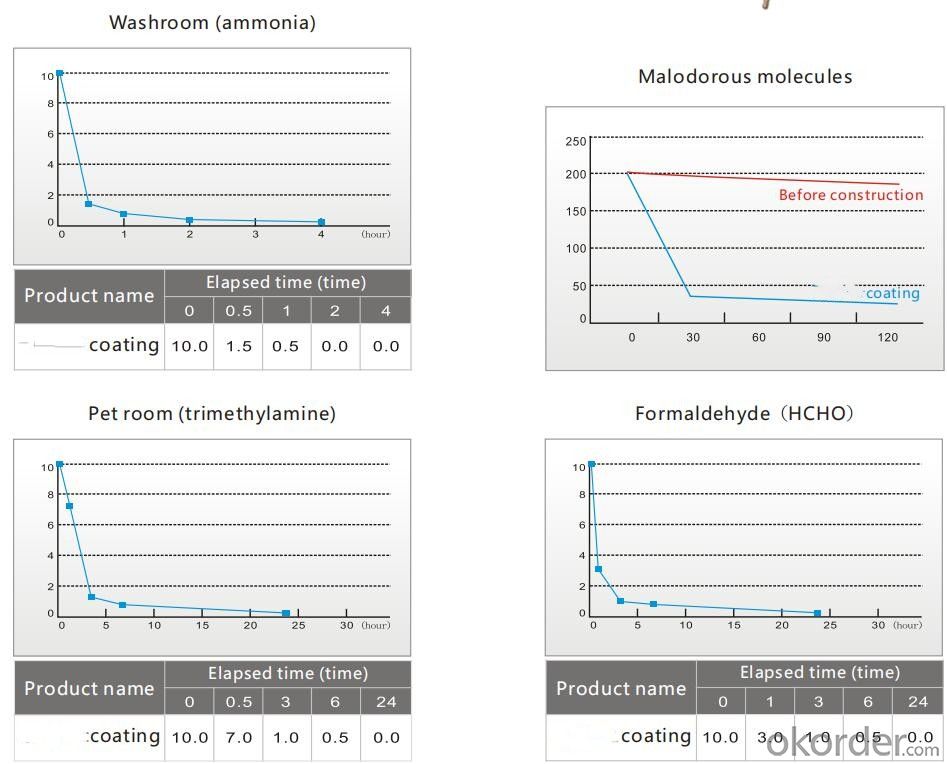 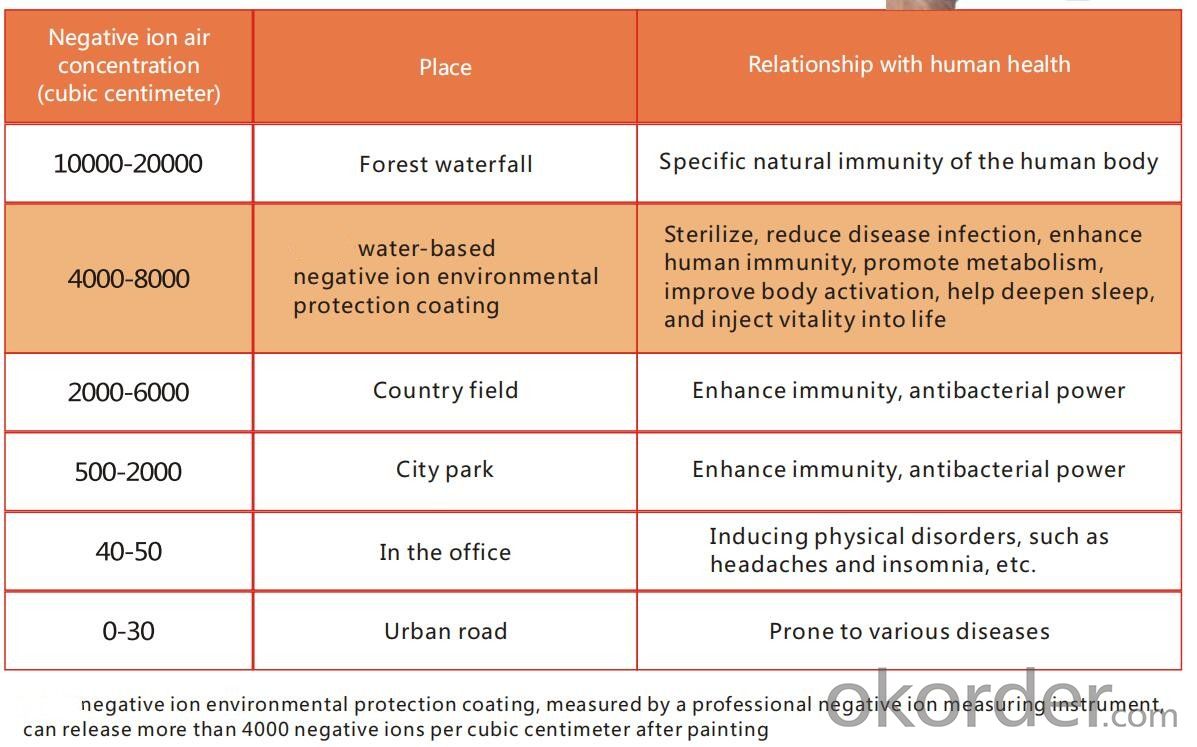 The Product Use Case: 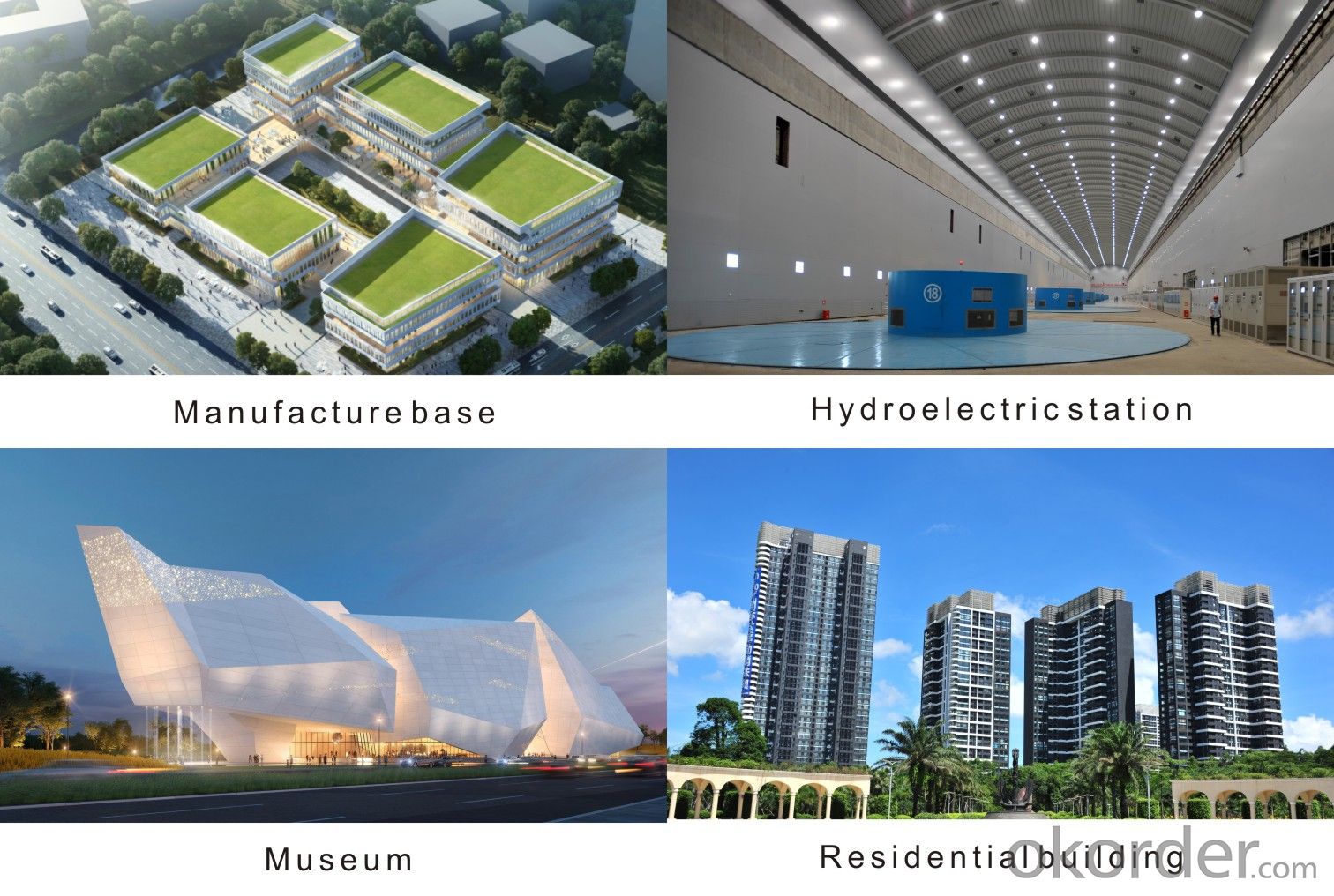 Q2 Why can negative ion paint brush that day to live that day?

Q3 Why does the anion coating have the function of removing the odor / adsorption and decomposition?

A3 The negative ions released by sericite, the main raw material of negative ion coating, are surrounded by malodorous micromolecules, combined with the evaporated warm water vapor (positive ions), and absorbed by sericite. And the components of sericite can decompose the stench, and no longer re-issued, thus forming the function of removing the odor adsorption decomposition.

Q:It is said that the characteristics of carbon is the color black, but how do I think the color of carbon ink is far less than dye ink so black
Dye colored deep also colored shallow, can be artificial modulation Well

Q:What is the difference between the pigment and the pigment in the paint?
Pigments and physical pigments are special solids that are dispersed in the paint to impart certain properties to the paint. These properties include color, hiding power, durability, mechanical strength, and corrosion resistance to metal substrates. Among them, the pigment is mainly for the adhesive to provide color and hiding power, but also need to meet the mechanical strength and corrosion resistance and other requirements. Pigments can be divided into two kinds of inorganic pigments and organic pigments. In the paint formulations, mainly the use of inorganic pigments, and organic pigments used for decorative coatings. Most of the body pigments are white powder, no actual function (color strength or hiding power), but has increased the thickness of the film, improve the durability of the film and reduce costs and so on. Color, color fastness, tinting power and hiding power are inherent properties of pigments, which are related to the structure and composition of pigments. The crystal morphology, particle size and shape of the paint on the luster, paint storage during the stability of the pigment and the base material on the wetting of the pigment surface have a greater impact. In the paint industry, the use of grinding or high-speed dispersion method is usually used to disperse the pigment evenly in the paint system and keep it in a suspended state or easily dispersed after settling. Therefore, the paint is concerned, the pigment is a very important auxiliary material.

Q:Is ICI paint a latex paint?
Is a British manufacturer, its production of latex paint, in China more famous products are more music brand. A few years ago by Akzo Nobel acquisition.

Q:What is the difference between a single component and a two-component polyurethane coating?
One-component polyurethane waterproof coating, without coal tar, petroleum resin, asphalt and organic solvents, no pollution to the human body and the environment, can be made into a variety of colors, beautify the environment. Cationor: Isocyanate, in the moisture or organic amine catalyst Self-crosslinking curing, the application period, 6-24 hours. Storage stability, in years as a unit, less paint.

Q:General paint and epoxy paint difference
Epoxy paint is the main advantage of cement, metal and other inorganic materials, the adhesion is very strong; paint itself is very resistant to corrosion; excellent mechanical properties, wear resistance, impact resistance; can be made of solvent or high solids coating; , Heat, water; coating non-toxic. The disadvantage is poor weather resistance, the sun for a long time there may be powder phenomenon, which can only be used for primer or paint; poor decoration, gloss is not easy to maintain; the construction environment requires a higher, low temperature coating Curing is slow, the effect is not good; many varieties need high temperature curing, painting equipment into a larger. Epoxy resin coating is mainly used for floor coating, automotive primer, metal corrosion, chemical corrosion and so on.

Q:Accidentally watercolor paint stained clothes, the application of what way to wash away?
Finally drift with water.

Q:How to determine whether the fluorescent dye is still effective
In general, regardless of fluorescent dyes or other dyes, as long as not reactive dyes and vat dyes, basically there is no failure problem.