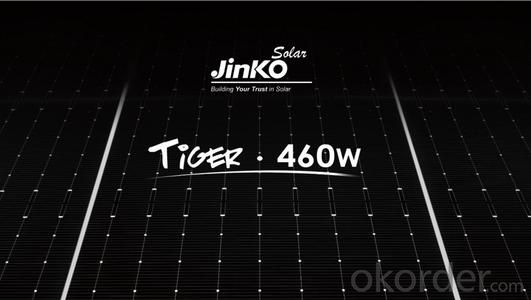 With ensured after service, we can both supply tire one brand such as JINKO brand and do OEM for you. Poly, Mono, Half cell, Double glass, Thin film and so on are all available. Tiger Solar Panel is the new developed style of Jinko double glass mono solar panel.

(1)Ultra-high Power for the Lowest LCOE and Highest IRR

Q:What SOLAR PANEL kit do I need?
You okorder.com... Depending on your needs, you may have to have these customized for your home, but they at least give you an idea of what's involved.

Q:how much power do i need from my solar panels?
You need an expert to figure out how many watts of power you will need and how many solar panels you will need to generate the wattage necessary to run your home plus charge the batteries for night use.

Q:Can a solar panel work with an inverter?
Solar panels output a very small amount of current. Even though you're getting 2V from the panels, you aren't getting enough amperage to power even the inverter itself, let alone anything plugged into the inverter. Car batteries are able to be used with inverters because they can crank out enough amps to power the inverter and whatever is plugged into it. Inverters only step up voltages and change DC to AC. They do not increase power (wattage) potential. If you want to plug in a 20W appliance into the inverter, the 2V source must be able to deliver 20W of power regardless of voltage. In pretty much everything solar powered, the panels are used in conjunction with batteries. The solar panels slowly recharge the batteries. The batteries are where most of the power comes from. Nothing is driven directly from the solar panels themselves unless the power requirement is low enough, such as a calculator. Solar panels will have an output rating in watts (W). If the wattage of your inverter plus whatever you plug into it is lower than the panel's output rating, then it can power it directly, provided you have 00% light input into the panel.

Q:Do it yourself Solar Panels?
sure, but if you don't know what you are doing you could really hurt or kill yourself. Basically you can do whatever you want on your side of the power meter and in the rare occurrence when your solar panels are producing more power that your home is using the meter will run backwards and you will be feeding power to the grid and theoretically reducing your power bill. At the very least you will be using less power from the grid

Q:Cost of Solar Panels for basement?
Only after you give an estimate of the power consumption you will have in the basement. Obviously you do not have a clue about solar panels or their usage. Suggest you find a book and start reading.

Q:How much Silver do we need for Solar Panels?
Some research has shown that small amounts of silver can improve the efficiency of solar panels. But this appears to be in the research stage and applies to the the thin film solar cells. Some solar panels makes use silver as the wiring in kind of a screen printing process, but you don't need to use silver, you can use copper or aluminum using different techniques instead. Generally the metal used is in small amounts and not a majority of the cost of the solar panel.

Q:How do Solar Panels Work?
A solar panel is made up of many small solar cells. Each solar cell uses light to make electricity. The solar cell uses light to make electrons move. The cell is made up of two different layers that are stuck together. The first layer is loaded with electrons, so the electrons are ready to jump from this layer to the second layer. That second layer has some electrons taken away. It is ready to take in more electrons. When the light hits an electron in the first layer, the electron jumps to the second layer. That electron makes another electron move, which makes another electron move, and so on. So the light started a flow of electrons, or electricity.