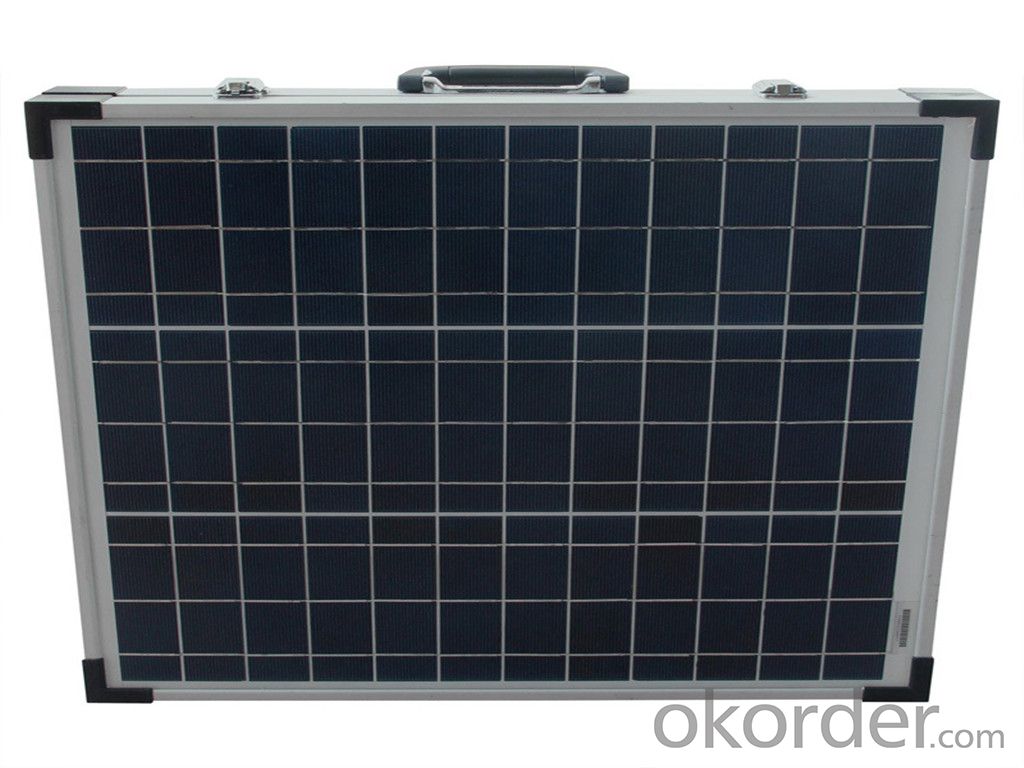 1. This monocrystalline solar cell has a high performance efficiency up to 17.6%.
2. Long Service Life can reach more than 25 years under maintenance according to stipulation.
3. Reliable quality leads to a better sustainability even in harsh environment like desert,farm and   coastline
4. High Transmission, Low Iron Tempered Glass adopted.
5. Advanced Cell Encapsulation.
6. Yunkai modules are proven for the reliability and superior field performance due to high-standard raw materials used, stringent quality control process and advanced manufacturing technologies.

Q:will a 5v 52watt solar panel charge four 2c dv 55ah batteries?
Technically, any solar panel can charge any battery, but it would take quite a long time do do so if it is a large battery. If you are aware of the voltage and either amp or watt rating of the unit that is usually used to charge the battery, the solar panel should have a similar power output to that charger to work well. amps and watts are quite similar, and can be converted with this simple formula: W=watts; V=volts; A=amps; W/V=A; V*A=W; When charging batteries, it is always wise to use less amps than needed, and roughly the same voltage as the battery being charged. The less amps used to charge batteries means the battery will take longer to charge but will last a lot longer in the long-term. Your solar panel should be sufficient to charge the battery, but you should test charge it to see if it works well. I recommend using a multimeter to check the batteries voltage every couple of hours. Once the battery reaches 2v, it should be fully charged. You should also check the amps in case they are not at the expected value (take caution when checking amps with a multimeter, when i do it i always end up melting my multimeter leads). The battery should be fully charged from anywhere between 6-48 hours. if it is charging faster, the solar panel has too much power. if it doesn't charge in this time frame, the solar panel is not powerful enough.

Q:do solar panels have to be in direct sunlight?
Should be okay but you might lose a little power if the windows blocks infrared or ultraviolet light [which I believe they do]

Q:Chem question regarding using solar panels ....?
It is not that simple. There are 3 main types of solar cells. Monocrystalline silicon is the most efficient and produces the smallest solar cells, and therefore the smallest panels. Poly-crystalline (or multi-crystalline) silicon produces the next most efficient type of cells and are a popular choice. Amorphous (or thin-film) silicon uses the least amount of silicon and also produces the least efficient solar cells. This means thin film system take up more area than the other two; an important factor to consider in relation to possible future upgrades; i.e. if you'll have enough space left to do so. The North (in the Southern hemisphere) or South (in the Northern hemisphere) facing roof collects the most energy. So this biases the roof area required. Your energy usage can be changed. Hot water (a major energy user) could be better using direct solar heating with peak demand boosting, either from mains or solar. There are other possibilities, either to reduce demand or to provide energy from other sources. Not all sunshine hours are equal. Hours around midday are far more productive than hours later in the day. This must be factored in.

Q:SOLAR Panels?
How Solar Cells Work by Scott Aldous Inside This Article . Introduction to How Solar Cells Work 2. Photovoltaic Cells: Converting Photons to Electrons 3. How Silicon Makes a Solar Cell 4. Anatomy of a Solar Cell 5. Energy Loss in a Solar Cell 6. Solar-powering a House 7. Solving Solar-power Issues 8. Solar-power Pros and Cons 9. Lots More Information 0. See all Physical Science articles You've probably seen calculators that have solar cells -- calculators that never need batteries, and in some cases don't even have an off button. As long as you have enough light, they seem to work forever. You may have seen larger solar panels -- on emergency road signs or call boxes, on buoys, even in parking lots to power lights. Although these larger panels aren't as common as solar powered calculators, they're out there, and not that hard to spot if you know where to look. There are solar cell arrays on satellites, where they are used to power the electrical systems. You have probably also been hearing about the solar revolution for the last 20 years -- the idea that one day we will all use free electricity from the sun. This is a seductive promise: On a bright, sunny day, the sun shines approximately ,000 watts of energy per square meter of the planet's surface, and if we could collect all of that energy we could easily power our homes and offices for free.

Q:is my solar panel big enough?
A equipment that super could have a max power production of around 2000 watts. i won't be able to declare if it fairly is sufficient to your desires via fact the figures you gave do no longer make experience. right here is why: the quantity of power being ate up at a given time is measured in watts--that's the ability point. To degree how lots electrical energy you utilize you utilize you need to use kilowatt-hours (or watt-hours, yet its greater handy to apply the former). So--in case you utilize a million kilowatt-hour, meaning you have been ingesting power at an favourite. fee of 000 watts (one kilowatt) for a million hour. Now, it may be VERY united statesa. for a house to apply 5,000 kilowatt-hours in a month--that's an exceptionally severe discern. Yor top power utilization could be 5,000 watts. A image voltaic panel equipment with a optimal technique of 2000 watts isn't adequate to power maximum residences. you easily want a minimum of two times that--and so lots greater in case you like to bypass off the grid. besides the shown fact that it must be an excellent investment besides. you are able to use very practically all the means advert that woudlld maximize your mark downs.

Q:How can I run my house purely off of solar panels?
It is not feasible to do everything with solar panels. However, if you overproduce during the day and sell the excess to the power company, you might be able to [pay for what you have to buy from them. Another thing you can do is use renewable energy in other forms, with windmills, hydraulic rams, and trombe walls.

Q:Which is Better: DIY Solar Panel vs commercial grade solar panel?
On my website you can read my story of how my dad made solar panels at home and now he pays nothing to the electric company.