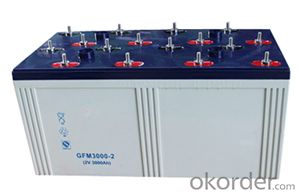 Q:How to repair the battery?
Charge the battery at constant voltage. It is the beginning of the time, using 0.1C ~ 0.25C current charge, to 16.2V later, by reducing the current method to maintain the charging voltage, until the charge current drops to 0.03C when the stop charging.

Q:What is the difference between a maintenance-free battery and a conventional battery?
Different materials will produce a different phenomenon: the traditional battery in the course of the use of the phenomenon of liquid reduction occurs, because the antimony on the grid will pollute the sponge on the negative plate of pure lead, weakened after the full charge of the battery Electromotive force, resulting in excessive decomposition of water, a large number of oxygen and hydrogen, respectively, from the positive and negative plates to escape, so that the electrolyte reduced. With calcium instead of antimony, you can change the fully charged battery back electromotive force, reduce the overcharge current, liquid gasification rate decreases, thereby reducing the loss of electrolyte.

Q:Lead-acid battery how to maintain?
Open the rubber cap, exposing the exhaust raft, you can see the battery inside, some of the battery exhaust cutting can be unscrewed.

Q:The role of the battery?
Battery is a kind of battery, its role is to be able to save the limited power, in the right place to make 6v4ah emergency light battery. Its working principle is to convert chemical energy into electricity.

Q:80ah how much battery storage capacity?
Is 80AH. Understood to discharge at 80 amps for about 1 hour (but not to say that after 1 hour is finished, there is still electricity). In theory, this is your battery power.

Q:How to deal with waste batteries?
Laboratory recycling method: ordinary dry battery is cylindrical, the outer cylinder made of zinc, the zinc cylinder is the battery negative; tube central carbon rod for the positive; tube for the manganese dioxide, ammonium chloride and chlorination Zinc.

Q:How does battery activation work?
If you are talking about dry batteries, that is, to add sulfuric acid can use the battery (commonly known as water bottles), then it is because the long-term storage so that a high degree of oxidation of the negative board, plus acid will be a high temperature, Low, you can add acid in the pool after the addition of a small current for a long time to charge, you can solve. Generally with 0.05C charge to 3 times can be.