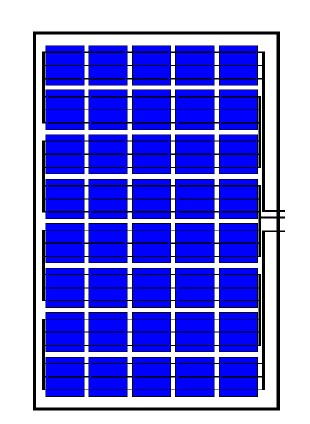 1,the good weak light performance(mornning, evening and cloudy day) has been tested and approved by professional third-party.

2,guarantee from 0~+6W as power tolerance each module.

Relying on strict quality management, capable cost control and constant technology innovation, a complete PV industry chain has been built up by CSG, covering poly-silicon, ingot, wafer, solar cell, solar glass and solar module. The vertical integration enables us to provide PV products with stable quality and optimal cost-performance for our customers. Moreover, our poly-silicon factory adopts hydropower generated from Three Gorges Dam, listing us into one of the few manufacturers using green energy for production 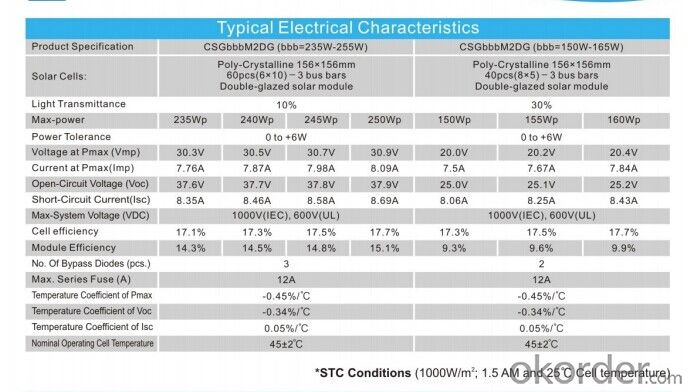 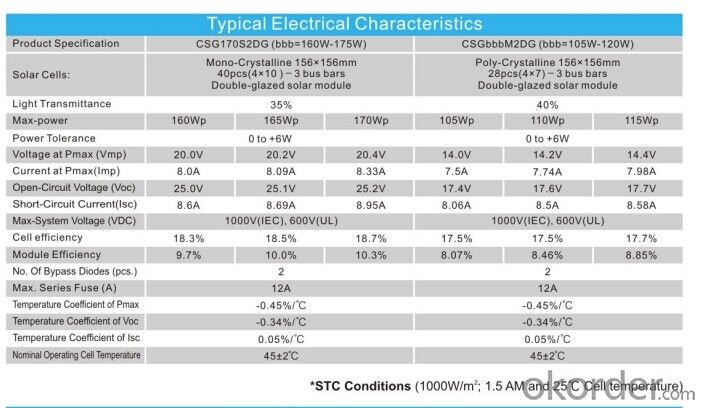 Q:should i get a solar panel?
It depends mainly on where you live - both politically and geographically. It's very worthwhile if you live in the Southern hemisphere and your house faces north. The same holds true if you live in the Northern hemisphere in a south-facing dwelling. If your government gives a generous rebate towards your purchase of the panels (as the Australian one does) then ,yes, it is worthwhile as you can make your money back in only a few years. Of course if your motivation is more an ecologic than economic one then go ahead and do it.

Q:Solarcity free solar panels?
What that means is free, considering the cost of electricity saved, i.e., no additional out-of-pocket costs. It could still be a good deal. For example, your bill is now $200 a month. Maybe the solar drops your bill to $40 a month, and you pay $50 a month to SolarCity for the duration of the lease. One thing to remember, though is that only works if your bill drops to $50 a month or less. If the panels don't produce enough, you may end up paying a $60 electric bill, and still $50 to Solar City, for the duration of the lease. They will also count on getting your federal tax credit, so I don't know how that works into the price. Also, they must make money as a leaseholder or financer, so it shouldn't be as good a deal as simply installing panels and paying for the whole thing up front. We installed solar electric in 2006, and it's still working great. If I had to do it over again, I think I'd get solar hot water first, though.

Q:having problems with my homemade solar panel....?
Have okorder.com . This could undoubtedly assist person!

Q:Why don't we use solar panels?
It's expensive - solar power isn't competitive with power from the grid in most countries and it's a very expensive in terms of capital - you have to put most of the money up front. Meanwhile fossil fuel plants are cheaper to build and from then on you only spend money on fuel when you're selling power (and of course you don't have to pay for the damage you cause society with air pollution and greenhouse gases).

Q:Will my off the shelf deep cycle battery I purchased at autozone work well with solar panels?
There are batteries particularly made for solar, such as the Trojan T05-RE . I think the RE stands for renewable energy. A deep cycle battery should work all right, although not quite as well. What you want to do is try out your setup first, with just one battery, and the panels provided. If this is one of those 45 watt kits, you may be surprised at how little energy you actually get from the panels. Increasing the number of batteries won't help, either - that's like getting a larger water tank, when you only have a trickle to fill it. If your goal is really to save money, the most cost-effective solar is the grid-tied type, with no batteries at all. That's what we have, and I've never regretted it.

Q:solar panels and wind power help?
If you are planning on purchasing a solar or wind system installed etc. I believe it will take considerable time to pay off. If however, you are even remotely handy, building a 3kw wind generator is well within the realm of possibility. I have a smaller windmill that I built myself using some ingenuity and some parts bought on OKorder. That windmill and 4 2 v deep cycle batteries run myu 9 share well 24 hours a day. I spent about $250 to build the windmill, tower, and buy used batteries, and have saved an average of $60/month for months now. This really isn't rocket science either, I'm a freakin' cook =) for more on the subject of diy wind and solar projects see the resource below.

Q:how do solar panels work?
The term solar panel is best applied to a flat solar thermal collector, such as a solar hot water or air panel used to heat water, air, or otherwise collect solar thermal energy. But 'solar panel' may also refer to a photovoltaic module which is an assembly of solar cells used to generate electricity. In all cases, the panels are typically flat, and are available in various heights and widths. An array is an assembly of solar-thermal panels or photovoltaic (PV) modules; the panels can be connected either in parallel or series depending upon the design objective. Solar panels typically find use in residential, commercial, institutional, and light industrial applications. Solar-thermal panels saw widespread use in Florida and California until the 920's when tank-type water heaters replaced them. A thriving manufacturing business died seemingly overnight. However, solar-thermal panels are still in production, and are common in portions of the world where energy costs, and solar energy availability, are high. Recently there has been a surge toward large scale production of PV modules. In parts of the world with significantly high insolation levels, PV output and their economics are enhanced. PV modules are the primary component of most small-scale solar-electric power generating facilities. Larger facilities, such as solar power plants typically contain an array of reflectors (concentrators), a receiver, and a thermodynamic power cycle, and thus use solar-thermal rather than PV.

Q:How about solar panels?
I will answer your question with a question. Why does everyone try so hard to point out why they think (I did say think and they are normally wrong) something will not work. I agree with your idea but you are wanting to put the help or money in the wrong place. If we would just take care of our own here at home. We would not need their oil so they would have more for their own use. This would aswell stop our money from leaving our country and they would NOT beable to use our money to build bombs to kill us with. So just by taking care of ourselfs we would be helping Iraq and our own country. We would not need their oil and they would get what they want. Us out of their country. However, That will not help bush and his OIL millionaire friends so it will never happen.