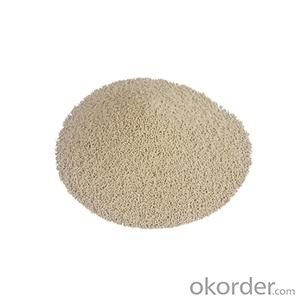 We are one of China's leading manufacturers who has owned patent technology in producing and exporting ceramic proppants used in the hydraulic fracturing process to increase the productivity of oil and gas wells. We can also produce ceramic proppants with different specifications according to clients' particular requirements.

The raw material is proportioned by the computer after being carried into storage bins, crushed into powder by the cylinder ball mill, blew into storage bin through pipes in which the materials are fully mingled, then carried to the pelletizing shop.

After spraying-pelletized by rotary granulators with 2m and 4m diameters, drying and dedusting, sieved by the multi-functional screen, the semi-finished product is sent to the storage bin and sintered by the rotary kiln, and eventually cooling, crushing, dedusting, rescreening, then packed and stored in the warehouse.

We constitutes a sound quality assurance system according to ISO9001-2008. The products have successively passed tests of the authentication of Reservoir Stimulation Laboratory of RIPED-Langfang Petro China, Stim-Lab and Frac-Tech Lab. Being certified as one of the top network suppliers of CNPC and SINOPEC. The excellent performance wins us customers from major oilfields and oilfield-services firms home and abroad, such as CNPC, SINOPEC, etc

Q:What is the financial management of crude oil?
Spot crude oil is a kind of electronic disk investment varieties, refers to the specific quality of crude oil as a trading spot contract, does not involve the transaction of crude oil. Crude oil spot trading in China started late, but due to the recovery of the market economy, in recent years has been regarded as one of the most potential industries.

Q:And what about the main oil change?
The international capital market hot money outflows or inflows (when the global financial markets lack of investment opportunities, a large number of their own into the international commodity market, especially the crude oil market, will inevitably push up international oil prices, and make it a serious departure from the fundamentals)

Q:Why international crude oil can not trade today
On the answer to a friend, this is not a stock, which comes from the suspension, said yesterday because the United States closed

Q:Crude oil is good for stocks
It's hard to say, the decline in crude oil prices generally explain the macro economy is not good, for a listed company is not a good thing, but for some big oil is good, because the decline in the cost of airlines, for example.

Q:U.S. crude oil reserves to increase crude oil is good or bad
Bad ~ crude oil stocks more crude oil market will not have that kind of thing to dilute the feeling of expensive

Q:Crude oil prices, refined oil prices have also been reduced, why the price of oil does not fall?
We also hope that the advantages of lubricating oil has been on the rise, but now the season is coming, we have to face what?