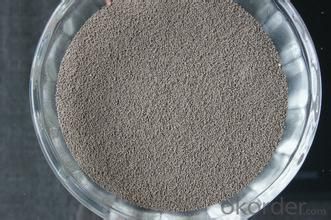 We are one of China's leading manufacturers who has owned patent technology in producing and exporting ceramic proppants used in the hydraulic fracturing process to increase the productivity of oil and gas wells. We can also produce ceramic proppants with different specifications according to clients' particular requirements.

The raw material is proportioned by the computer after being carried into storage bins, crushed into powder by the cylinder ball mill, blew into storage bin through pipes in which the materials are fully mingled, then carried to the pelletizing shop.

After spraying-pelletized by rotary granulators with 2m and 4m diameters, drying and dedusting, sieved by the multi-functional screen, the semi-finished product is sent to the storage bin and sintered by the rotary kiln, and eventually cooling, crushing, dedusting, rescreening, then packed and stored in the warehouse.

We constitutes a sound quality assurance system according to ISO9001-2008. The products have successively passed tests of the authentication of Reservoir Stimulation Laboratory of RIPED-Langfang Petro China, Stim-Lab and Frac-Tech Lab. Being certified as one of the top network suppliers of CNPC and SINOPEC. The excellent performance wins us customers from major oilfields and oilfield-services firms home and abroad, such as CNPC, SINOPEC, etc

Q:Is there any effect of non agriculture on crude oil?
Take the payrolls data this month to explain it, when the data released before the market began its expected to start warming up, and when the data is released, the actual data is far greater than the predicted value, crude oil prices began to accelerate down. But after that, it began to return to normal.To know the economic data of crude oil, especially before the impact of the trend of CNOOC also has a certain limit. So investors should be prepared before their data, so as to make a profit.

Q:Spot crude oil market analysis software which can be downloaded
At present, most of the domestic spot market is a market maker trading model, also known as decentralized counter transactions.The most typical example is the gold, gold Daily reported a selling price of gold, and offer a collection of gold prices, gold price in accordance with the instant transaction, but the transaction is full.

Q:What is the difference between foreign exchange and crude oil?
Foreign exchange transactions refer to the way in which a foreign currency is bought in one currency and sold in another currency. In the international market, the exchange rate of various currencies fluctuates frequently, and it is traded in the form of currency.

Q:What is the relationship between the dollar exchange rate and the price of crude oil?
Of course, in turn, the decline in oil prices, is a good sign for the economy, people have confidence in the U.S. economy will push up the dollar, cause prices to fall further. According to expert estimates, the correlation coefficient between crude oil prices and the dollar exchange rate is -0.7., that is to say, the weak dollar and high oil prices often appear at the same time. So, the dollar with the trend of crude oil price should be changed in the opposite direction.

Q:What does it mean for spot crude oil?
Spot oil deposit popular point that is a spot oil trading guarantee funds before the operation in the can, since it is the guarantee funds, is only temporarily frozen, if the order is cancelled (Ping Cang) deposit funds back to the account.

Q:What are the effects of non farm oil?
The U.S. economy is positive bullish for the dollar is negative for crude oil; the non-agricultural economy is negative for the dollar is empty the favorable oil; basically non-agricultural data for crude oil in the stimulus amplitude above 100 points, the individual will be unilateral volatility 400. So if the investor's funds are not very large, it is recommended not to order the data out before, such as market stability and then re approach. Do not chase sell.

Q:Spot crude oil in the country when it came out
This year, the domestic market is just to rise, crude oil market volatility is more intense, more profitable space