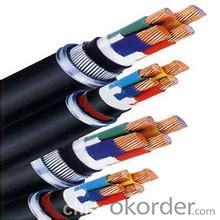 5. The environment temperature should be no lower than 0oC when lay. Otherwise it should be preheated.

6. The cable is laid without horizontal drop limit.

8. Partial Discharge Test: The discharge volume should be no more than 10pC under 1.73Uo for the cable.

Q:Where do u put the cables?
Run the power cable under the carpet on the side of the car with the battery and the signal cables under the carpet on the opposite side so that they don't catch any interference from one another. If you don;t know how to do it properly you may want to pay someone else to do it or try searching online for a guide on what exactly to do.

Q:can battery powered TV's have cable?
How can you have cable without a cable connection? If they come with an antenna, you get off-the-air programs. To get cable, the TV needs to have a cable tuner and you need to have a cable feed.

Q:How Do I Run The Power Cable From An Amp Wiring Kit From The Battery In To The Car Without Drilling?
not sure about your car, but ford mustangs are a huge pain unless you drill a hole (i know, I cut myself many times trying to install a buddy's system), if your wires are small enough, you may be able to slip it through the firewall for a clean installation, if you dont care about a clean install, you can run it up the hood and in the door XD (a friend of mine did this as well, looked horrible, but I'm a fan of clean installs) I prefer to drill holes if I cant find a hole in the firewall big enough, but be careful where you drill, its unlikely but you may end up hitting something like the transmission, engine block, or something fragile. Hope this helps.

Q:what are the power cables on the back of a dell monitor called?
One is the power supply cable (Black one) and since its blue the second one would be a VGA cable. Hope this helps.

Q:Where the computer can be a bare chassis. Which hardware inside the framework
It is best not to use this, because you have no way to test the signal line. There are special 10 line 8 line terminal telephone switch patch panel

Q:Dell laptop plug in the power supply usb can not be used, how is it?
KVV is the control cable, generally do industrial control; and RVS is twisted pair, generally used for weak system, to eliminate the interference requirements of the occasion, such as two-wire bus system, specifically, the electrical fire bus more Such as RS485 bus and so on.