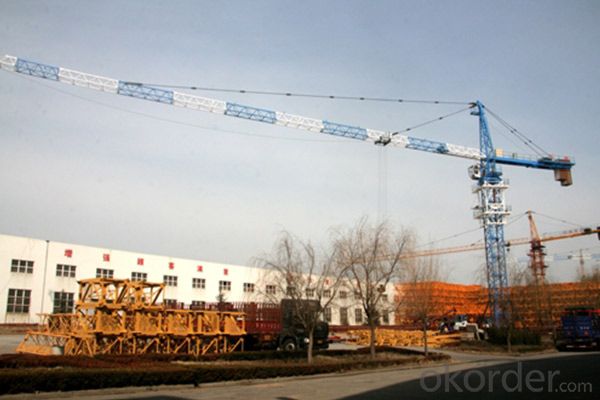 The auxiliary winch can be used on the derrick: this provides users with the possibility of a motorized derrick at the base of the machine.

DVF Distribution
The jib-footDVF mechanism is easily accessible in total safety.
Progressive speed variation by proportional control.
The speed depends directly on the controls manipulated by the crane operator.
To make driving the crane easier, 2 hard spots integrated into the controlsprovide better pinpointing of the speed.

With different mechanisms (33 to 150 LVF Optima or 108 to 215 hp LBR), MD cranes are capable of high working speeds through optimizing speed in accordance with the load hoisted, allowing for gains in productivity.
•  For the first increments (approach speed, sling tension, etc.) hoisting of the load is controlled by the load security
device (a proving ring).
•  For working speeds, the Optima system adapts the speed in accordance with the load hoisted. This enables full power of the motor to always be used for optimum productivity.
The LVF Optima provides a gain of around 25% in descending speed.

RVF + orientation
The RVF Optima + orientation enables gentle rotating movements without jerking.
Fully integrated progressive control.
Driving adapts to the behavior of the crane operator:
•  Traditional driving thanks to action controlled by stoppage of the command. The slow-down phase of the jib is managed by the frequency variator in this case.
•  Or by an inverted command in the slow-down phase, called a «counter-orientation» command.
As a result, the crane operator can control stoppage.

The design of the electric sockets allows simple and quick connectionon all sites.
Whilst operating or transporting, the cables are integrated and/or stored easily in the crane, increasing the service life of the electrical equipment and providing optimal conditions of safety.
•  There is a special channel for electric wiring in the counter-jib.

Considered to be the parent range to tower cranes,
MD cranes have been around since the beginnings of the Potain brand. This range is the pillar of all Potain product know-how.
Constantly evolving to meet market expectations, these cranes are equipped with the latest technological innovations and boast the best performance possible.

All the components of the MD range are designed to minimize the total number of trucksrequired to transport them between sites.

The jib components can house the jib tiesto make transport easier and quicker.

Thanks to the factory-performed pre-reeving and the auxiliary winch supplied as standard, assembly of the jib and counter-jib ties can be carried out quickly and in total safety.

The mechanisms are always used at full power. When hoisting, the speed is optimized according to the load and command used. In distribution, progressive variation of speedand the maximum speed are adapted to the weight of the load. In orientation, there is controlled proportionalspeed with optimal acceleration and deceleration in accordance
with the maximum admissible torque for the mast.

Q:The arm of a crane at a construction site is 17.0 m long, and it makes an angle of 13.5◦ with the horizantal.?
The easy answer is that the applied torque is the cross product of the radial arm and the force, or in this case T = 811*17*cos(13.5). The hard (it's actually not that hard) answer will depend on the design and material properties of the crane. Since the problem asks for max torque, I'd find the bending stress due to the moment found above (T = 811*17*cos(13.5)) where bending stress = Ty/I. Next, compare this to the yield stress of the crane's material and an appropriate failure criterion.

Q:John Steinbeck and Stephen Crane?
Try Maggie: A girl of the streets, which is the novel I think of for Crane being part of the Realist school. I think you can also see Steinbeck, in his selection of subjects as being in that same school of fiction. So less for their style and more for their choice of subjects.

Q:Paper cranes...?
no and no proof

Q:paper cranes?
Most people give paper cranes to their love ones who are ill. Since it is a tedious job, they will all help each other in folding it. Shalbi I may be wrong, but I know that to be able to make a wish, you have to fold the cranes yourself. The wish can be anything, but the most common wish is to recover from sickness and have a prosperous life. A crane signifies longevity and fidelity that is why they like to use them on weddings. ^_^

Q:What kind of wish can I wish for with an origami crane?
You can make whatever wishes you want. Just remember that the wishes you make reflects what kind of person you are. So maybe you should make wishes you can be proud of. Also remember, if wishes were horses beggars would ride If you for example would wish that you would have $10, your wish is most likely to be fulfilled if you manage to sell each origami crane for 1 cent... Generally wishes come true if you really work for them, Not by sitting, doing nothing and wishing.

Q:crane angels?
Angels can appear as many things such as; Fire a Bird The wind a human Themselves invisible I had one wake me up once, kept shaking my leg! Amazing! It help save someone.

Q:How to explain and classify the types of tower cranes? What do QTZ80 and Q5510 mean?
This is only the tower crane in different periods of different naming:QTZ---- is the general saying in 80s of last century, Q means steel material (usually Q235), T is tower crane (mostly tower top type), Z indicates heightening method is self lifting,PT------ is the naming method in recent years.

Q:How do I get on the cranes on the Highrise map in MW2?
watch that video its the easiest way to learn it and not have someone explain through text and what the hell is that first guy saying??

Q:What kind of personnel should be installed for the tower crane installation and disassembly?
According to GB specifications:2.0.3 the installation and disassembly of tower cranes shall be provided with the following personnel:1. The project and the safety supervisor and the mechanical management personnel who have the safety inspection certificate;2, with special construction operation qualification certificate of construction, lifting machinery, installation, demolition workers, lifting signal workers, lifting drivers, cable operators and other special operations personnel.And an electrician.