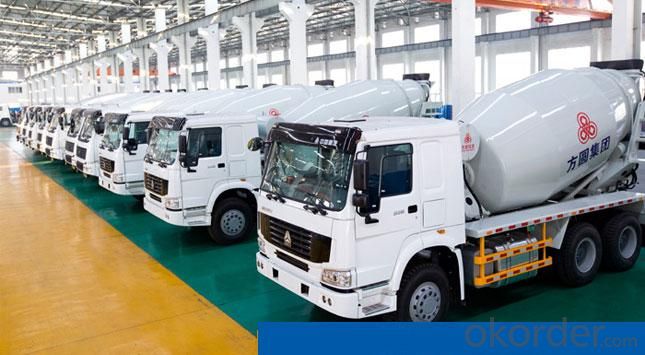 1. The mixing drum and the helical blades adopt high-intensity wear-resistant material, improving the service life by over 59%.
2. The unique space helical blades improve the mixing efficiency by 35%, reducing the mixing time.
3. Small volume truck mixer is optimal in small volume concrete and mortar construction. Its using with large volume truck mixer can save the operating costs by 80%~200%.
4. Adopt the box structure design and made by the 8mm-thickness rectangle high-intensity steel pipe. Compared with the same industry (5-6mm thickness), the service life improves by 50%, and the concrete transportation cost of each ton reduces by 1.6%.
5. The humanized 3-point linkage operation allows various operations of mixing drum in the cab.
6. The convenient and high-efficient water supply by air pressure cleans clearly and thoroughly. Adopt the parts of famous brand. The service life of the steel water pipe is five times of common water pipe.
7. Higher safety performance and optimal axle load distribution improve the service life of the truck by over 30%.
8. Three kinds of salvage disposing schemes prevent the residual mud polluting the roads, which is environmental friendly and practical.
9. The automatic temperature control radiating oil tank with vacuum meter effectively ensures the stability and reliability of the hydraulic system.

The above parameters are subject to change without prior notice, please refer to the actual product.

Q:What is the purpose of the concrete mixer
You're not going to give it to you, right?so i do not ansewr you

Q:Is a tanker and a mixer a thing
Concrete mixers are also called concrete mixers, and they are called concrete transporters, which are actually a kind of thing. Concrete mixer truck A special truck used to transport construction concrete; Because of its appearance, it is also commonly referred to as the tian. These trucks are equipped with cylindrical agitating cylinders to carry mixed concrete.

Q:What is the normal speed in the transportation of the concrete mixer
In the case of idle speed (engine speed of 600 r/min) generally feed mixing every 4 r/min, when discharging at around 6 r/min, the gas engine speed from 1500 to 2000 r/min when the hydraulic pump and motor mechanical efficiency is highest, feed mixing around 10 r/min, when discharging 12 to 14 r/min. Speed is adjustable, through adjust the driving torque of each point, can make the speed increase or decrease, when the stirring speed too fast will affect the service life of the hydraulic system, general stirring speed in the process of transportation for the 3 revolutions per minute.

Q:How many layers of steel wire tyres are used in concrete mixers
For example; 1200 the r20 pr M588 18 1200 is the outer circle size R is the radial tire 20 is the inner circle size, Should be 18PR!!!!!! This is the level of the wire in the tyre. M588 is the symbol of tire tire!! Concrete agitator truck tyres are usually used in 18 levels of steel wire tyres, which is used in 20 levels I'm selling tyres, I hope to help you

Q:How many years does the concrete agitator truck go away?
Depending on how you use it, it doesn't matter if you take care of it for more than a decade

Q:The concrete mixer transporter is running continuously for no more than one hour
Whether this is a self-mixing concrete car, or the amount of the addition of a moderator, and weather factors.

Q:What is the meaning of the word "concrete" in the concrete mixer jar?
"Concrete" is a synonym for "concrete". Everyone knows that, especially gay people who work in the construction of the gay community, probably know the word. But who created the concrete? When was it approved for general purpose? -- I'm afraid not! The creator of the word "concrete" is professor CAI fangyin, a prominent structural scientist. The creation time is 1953! 56 years to date. The teaching technology was backward, there was no tape recorder, no copiers... Students take notes in class. "Concrete" is the most commonly used word in construction projects, but there are too many strokes to write. Hence the thinking agile CAI fang Yin is bold to use "artificial stone" 3 words instead "concrete". Because "concrete" three words have 30 words, and "artificial stone" three words only ten, can save 20 pen, greatly speed up the note speed! Then "artificial stone" synthesized "concrete"! And they are promoted in college students. Published in July 1955, the compilation of the Chinese academy of sciences committee room "noun" examination and issued "structural engineering noun", explicitly recommend "concrete" and the word "concrete" and use. Since then, "concrete" has been widely used in the books and periodicals of various kinds of construction projects. On June 7, 1985, the Chinese language reform commission formally approved the "concrete" and "concrete" synonym and the legal status of the "concrete". In addition, the sound of the "concrete", tong (the same), happens to BE "bee-ton" in French. German "be-ton", Russian "Be - TOH

Q:Is it possible to mix the concrete in a mixing truck for eight hours?
When the concrete is removed from the mixture, it is best not to exceed 150min according to the temperature. But now with the development of the additive technology, and high performance concrete initial setting time and perhaps even control to 13-15 hours (Shanghai world financial center base raft concrete). You can discriminate in this way. Concrete stirred 8 hours, not casual water, workability change is not very big, can use, but 1 can back, part of discharge, stir some higher than the another two grades of concrete, quick stir for a few minutes and pouring into the part or not is not very important part of the bearing. According to the admixture, add admixtures, whisk for 3-4min, and reduce the use of one or two grades. If you have added a lot of water to the site, there has been a significant change in the ease of use.

Q:What is the car for concrete
These trucks are equipped with cylindrical agitating cylinders to carry mixed concrete. During the course of transportation, the mixer will be kept rotating to ensure that the concrete is not frozen. After the concrete is transported, it is usually used to flush the inside of the cylinder to prevent the hardened concrete from taking up space, making the cylinder volume less and less