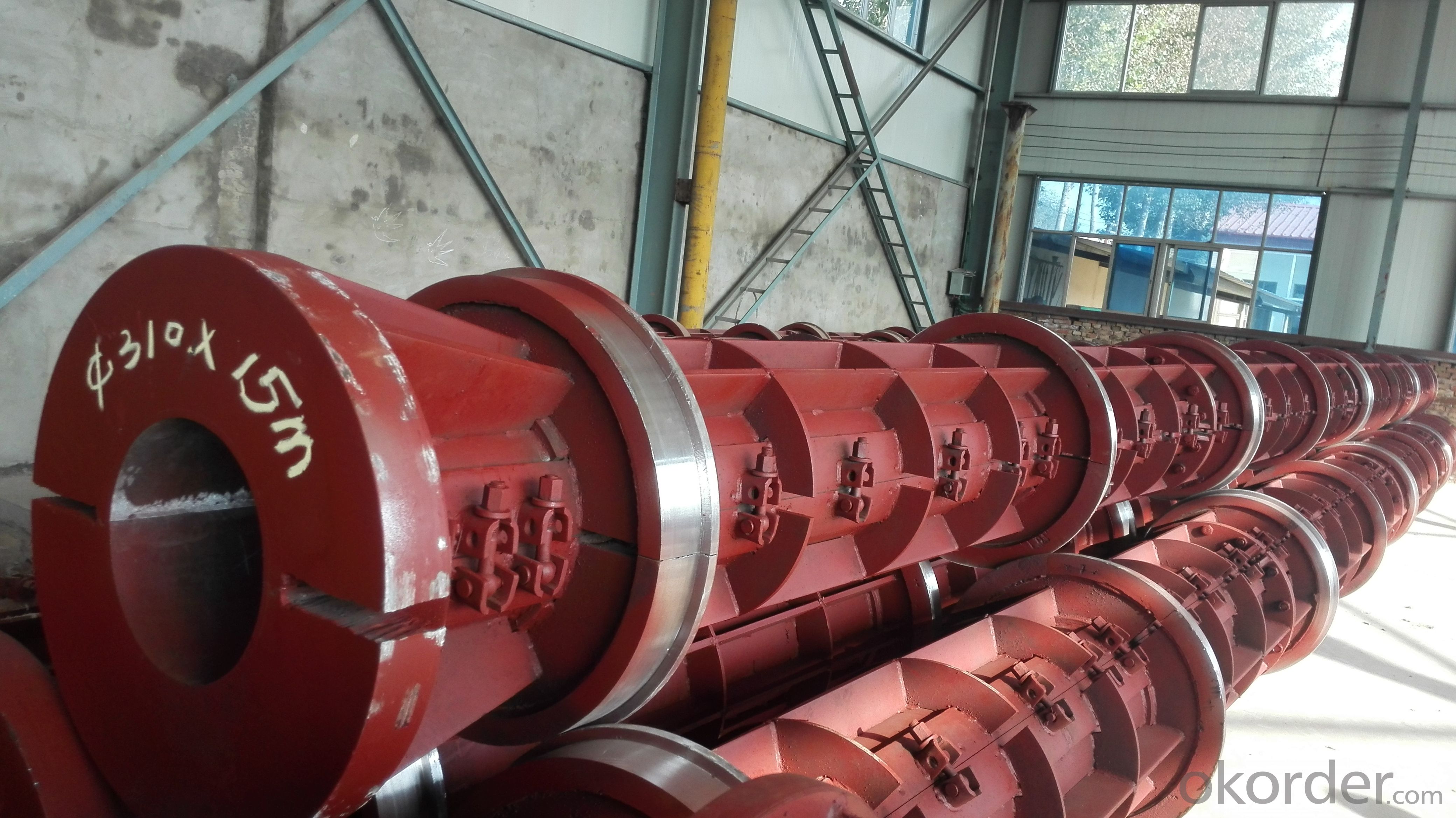 manufacture technology is longitudinal tension by steel wires. Then it can

squeeze out the excess water in the concrete under the centrifugal force. Thus, it can greatly improve the concrete density and strength.

In order to form concrete more quickly to meet the design strength of more than 70%, steam curing can be carried out so as to shorten the mould-releasing cycle.

1. Welding technology, which enhances the smooth finish of the mould wall, and

eliminates the uneven traces of rivet holes. So the concrete poles appearance

will be improved significantly.

2. The cylinder is changed to Utype longitudinal stiffeners which can greatly

increase the stiffness and flexural strength of the steel mould,

3. Install the slot with rubber sealing strip, in order to prevent leakage to

2. Put the mixed slurry into the mould and rotate in different directions under the motor driven.

3. In this process, the redundant water in the concrete is released by the force of centrifugal, and the concrete is dense and high strength. And then, the pole forms around the inner wall of the pole mould. 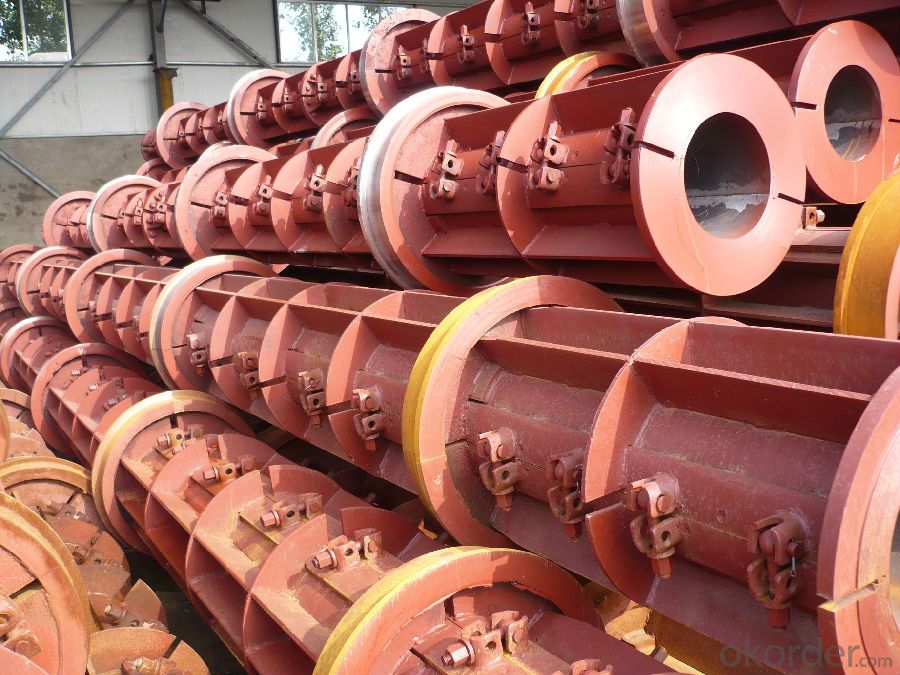 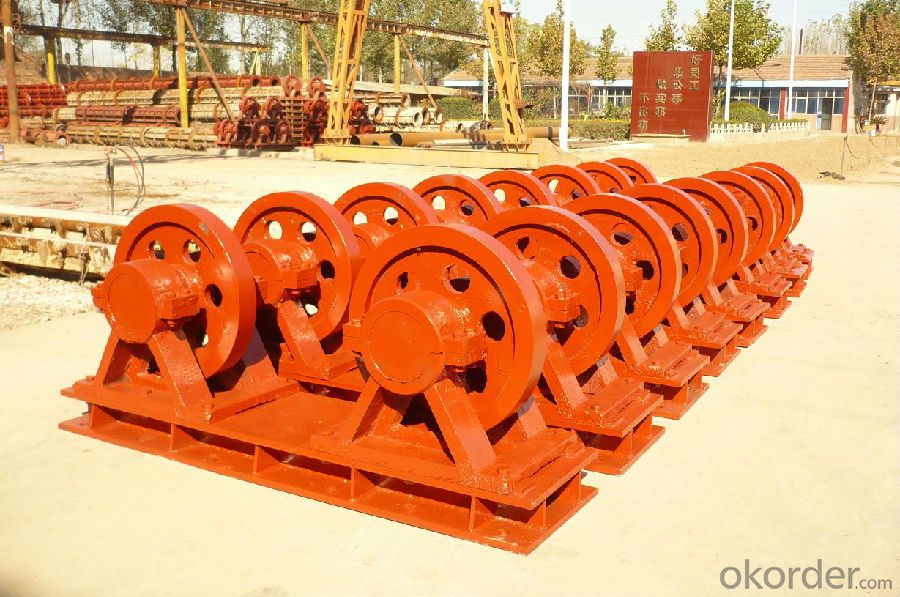 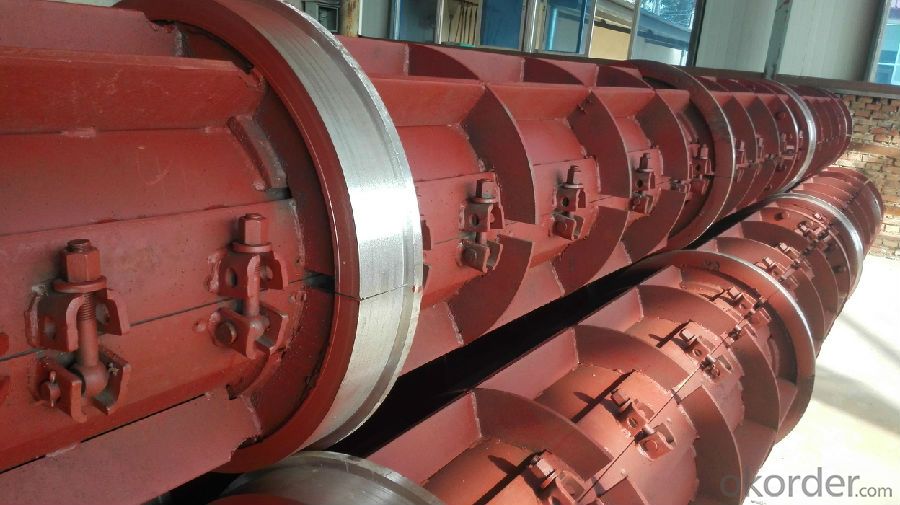 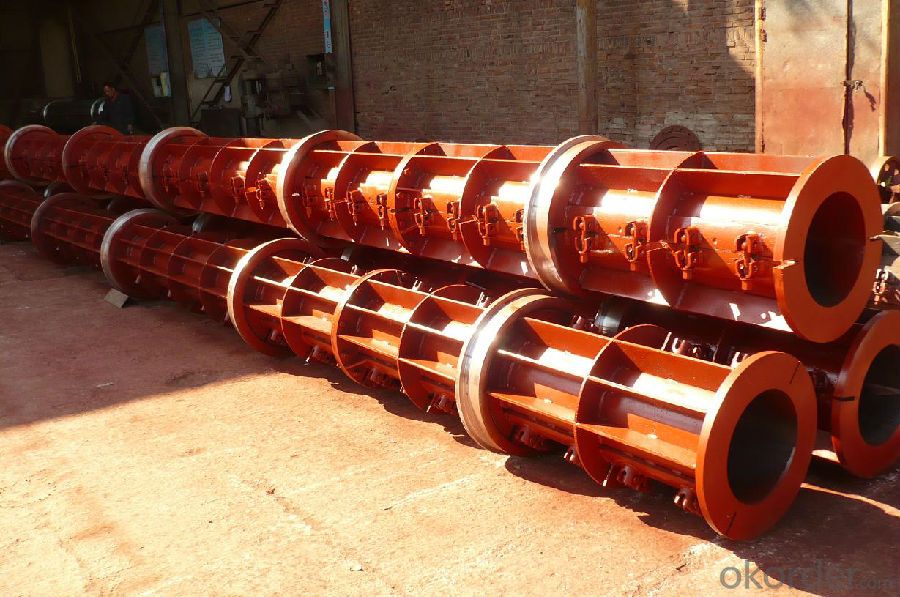 Q:Production/Mobile Machinery (list)?
laptops, fax machines - something that is used in the working capacity that is production work? - portable jet wash machine, burger van? Try searching it for more info but for a secretarial position I would presume they mean mobiles, laptops etc

Q:what would be a good chemical or solvent to use on cleaning an old, dry, piece of machinery?
There are degreaser products, but those are fairly aggressive and intended for really gummy congealed lubricant removal. WD-40, while less aggressive, is still a pretty good solvent as well as a light lubricant. If you need a lot of it, they sell it in 1 gallon cans (and probably larger sizes for industrial use), and they have pump sprayers to use with that size. I think a product for use on headlights or faded paint would be more of a polish than a degreaser, so that would not be appropriate unless you're trying to clean up a plastic viewing window or some such plastic guard, shield, etc.

Q:The cost incurred on the installation of machinery is?
fixed cost lol i feel like im taking your micro test for you

Q:We want to have a pool installed. How much clearance does the machinery need?
if there is enough room for a bobcat that should do it

Q:i'm looking for someone or somewhere that may be interested in purchasing some antique machinery.?
Did you ever consider giving a little more detail on the subject Yes there is someone somewhere looking for something ??

Q:I need to have a partner in Faisalabad + Sialkot for Machinery Stock web Portal?
1. In which part of the globe is Faisalabad + Sialkot ? 2. What is meant by 'Machinery Stock web Portal'? 3. You say you need to have a partner. OK. Do you need our permission for it? 4. In what way can we help you? I mean what is your question for which you seek an answer?

Q:Your firm purchased machinery with a 7-year MACRS life for $10 million. ?
What formulas have you tried? It appears as though you are just trying to get everyone on here solve the finance problems for you!

Q:Looking for something that you put over machinery to silence them?
You can build a box using 1x or 2x lumber and plywood, depending on how big you need it. Then line the box with either egg crate foam or styrofoam. Both act as noise supressors. Be sure to allow room for ventilation if needed.

Q:Why do latheists want the unsubstantiated Theory of Machinery taught in schools?
Micro machines are true and they are devolving I have seen it with my own eyes ! They used to be much better constructed but now look like god is creating them in China . * snicker *