This product is apply to AC rated voltage 0.6/1kV circuit, for the use of power transmission and distribution, suitable for densely inhabited district with high-rise buildings, Shopping malls, etc.

When short circuit happened (the duration no longer than 5 seconds), the maximum temperature of cable conductor is not exceeding 160℃.

b. When laying cable, the ambient temperature should not be lower than 0℃, if not the cable need to be preheated. The bending radius of multicore unarmored cable should not be less than 12 times of outer diameter of cable, 15 times for armored cable. 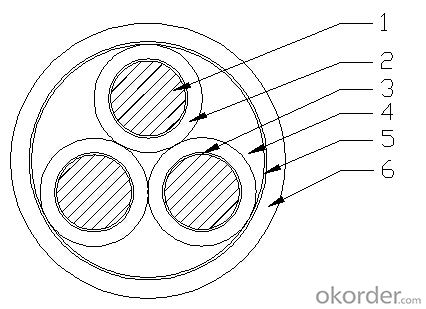 Q:Is there a telephone/power line running between Britain and America under the sea?
Satellite lol If there was a cable some kind of fish or something would of cut it by now.

Q:Two power lines same conduit?
If both are simple power lines, then you won't have a problem. The only time you need to be cautious is when you are running a high-voltage power cable and a signal cable alongside each other e.g. a 110VAC cable alongside a 4-20ma signal line from a transmitter. The reason for the potential interference is that the power cable emits an electro-magnetic field which can potentially cause induction in the cable alongside it and effect the signal with an induced EMF. The likelihood of this depends on the cable type, screening and correct earthing measures. It's a good bet to never run a power and signal cable alongside each other, and if you have no other choice, seperate them by means of a makeshift Faraday Cage. If both are doing nothing other than supplying power to the system though, then any induced EMF will be so minute, it will not likely affect the system in any way.

Q:What is the length of the wire that affects voltage and electricity
Because the AC operation will produce eddy current, will make the steel pipe and cable heat burned

Q:Does the eVGA GT 440 graphics/video card need a power cable connect from the psu to it?o?
No, it doesn't need one, but it's also a crappy purchase. The Radeon 6670 costs about the same, doesn't require external power, and slaps the GT 440 silly.

Q:Can someone help me find an internal PC power splitter cable that has a female to two male instead of 2 female?
that is exactly what you need that you linked. nobody i know has the opposite because your psu is female and your drives are male. there for you need a male to 2 female splitter which that is. the only reason why you would have to go reverse is if something is extremely power hungry.

Q:calculation for cable sizing between 300AH battery and 200A power plant?
The battery and power plant statistics do not enter into the calculations. I assume that the load is continuous, and the battery is to be continuously trickle charged. The power plant will have to deliver the load current and battery trickle charging current, at the voltage necessary to charge the battery. You will need to know the load current, the trickle charge current, the distance between the power supply and the battery (or load if you connect directly to it), and the voltage necessary to supply the load and trickle charge the battery. The voltage drop will be the total current multiplied by the total circuit resistance. this resistance will be the sum of the individual conductor resistances. As an equation, this is Voltage drop = total resistance times current in amperes. The total resistance will be the voltage drop divided by the current. Now you know how much resistance you can stand. The National Electrical Code in the US has tables showing the resistances of various sizes of wire, and how much current they are rated to carry. From these, or maybe from you wire supplier, you can find out what size wire you need. It will need to be large enough to supply the voltage and current, and have a rating for at least that much current.

Q:My cable box will not show power?
The power wont show because some thing might be damaged inside.

Q:Where do i put the power cable of a video card on the Motherboard?
Connect it to your power supply.